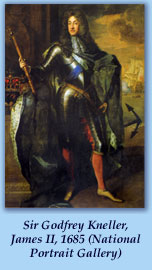 In response to a growing interest in Jacobitism, especially since the 1970s, the Jacobite Studies Trust was formed in 2003 and became a registered charity in 2004. Distinguished scholars agreed to serve as Trustees and as members of the International Committee who help to direct its academic programme.

The Objects of the Trust are to promote the study and understanding of Jacobite history, ideologies, arts and music from 1688 to 1807, as well as the debate between Whig and Tory/Jacobite protagonists.

The Jacobite Studies Trust will organise and publish the proceedings of conferences and award bursaries to young scholars. It plans to found teaching posts tenable at universities.

Huge numbers of Jacobites went into exile to Europe, the USA, Canada and the West Indies and greatly contributed to the life of the host countries. This is virtually virgin territory and a systematic survey of these exiles is planned.

The Jacobite Studies Trust is registered for Gift Aid and UK taxpayers can make their donations go further by completing the Gift Aid Declaration form here to allow the Charity to reclaim the tax.

Eveline Cruickshanks, who died on 14 November 2021 at the age of 94, will be principally remembered for inspiring the revival of academic interest in Jacobitism. She provided the impetus behind the founding of the Jacobite Studies Trust and offered generous assistance to many young researchers writing on subjects connected to early 18th-century politics, including me. A Fellow of the Institute of Historical Research, Eveline was the author, editor, or translator of a series of books and articles dealing with British history from the Glorious Revolution to 1760. For more than two decades she labored for the History of Parliament Trust, composing much of the 1715-1754 volumes on the House of Commons (1970), and, with D.W. Hayton and Stuart Handley, compiling and contributing to, The House of Commons, 1690-1715 (2002).

Eveline was born in Marseilles and evacuated to Britain in 1940. Her early interest in the history of France may have been inspired by her French mother, who worked for the Free French delegation in London during the Second World War. Her first published article, in the 1954 Bulletin of the Institute of Historical Research, was on public opinion in Paris during the 1740s. Her 1956 doctoral dissertation for the University of London focused on "The factions at the court of Louis XV and the succession to Cardinal Fleury, 1737–45." The dissertation was followed by Folio Society editions of two translations by Eveline of French court memoirs from the reign of Louis XV, those of Mme. du Barry (1956) and of the comte de Ségur (1960). The Folio Society also brought out a volume of Hogarth prints with her annotations (1957). For the title pages of these works, she changed the spelling of her first name from "Evelyn" to "Eveline," perhaps because the second version resembles the French "Éveline." She kept to the original spelling, however, when she married the architect Desmond Wyeth in 1956. They settled into a modernist house designed by Desmond, Full Point in Sevenoaks, Kent. The front door was accessed by an impressive bridge.

In the late 1960s, when she was preparing political biographies for The House of Commons 1715–54, edited by the ailing Romney Sedgwick, Eveline turned decisively towards British political history. Although she was responsible for the entries of Whig as well as Tory politicians, Eveline was assigned to write the introductory essay on the Tory party, which gained instant notoriety for its thesis that the Tories were essentially Jacobites throughout the period. This conclusion was based on Eveline's work in the Stuart Papers at Windsor and the French Archives Étrangères, sources that had rarely been consulted by previous scholars. Her insistence that the Tories were an organized party also marked a stunning departure for the History of Parliament, directed up to then by admirers of the anti-party interpretations of Sir Lewis Namier. Eveline was among the first to propose that politics in the first half of the 18th century were ideological rather than personal. Her authorship of the essay was soon known, although the History of Parliament editorial board preferred that Sedgwick's name be attached to the whole introduction, overriding his own principled objections. Eveline restated her controversial thesis in her first monograph, Political Untouchables: The Tories and the '45 (1979). Her depiction of Tory support for a French invasion in the years leading up to the 1745 rebellion rested heavily on the reports of the French spy James Butler, whose accuracy has been questioned. She arguably overstated Tory Jacobitism, overlooking widespread indecision and indifference, as well as occasional hostility to the exiled Stuarts, but she also stimulated a great deal of interest in how extensive and deep-rooted Jacobite sentiment may have been in the mid-1700s.

Eveline's scholarly work from 1970 to 1995 can be divided into three parts: her research for the History of Parliament; her published articles and books; and the volumes of essays that she edited. By her own reckoning, she contributed over 200 biographies to the 1660-1690 volumes of The House of Commons, edited by Basil Duke Henning (1983). After 1973, she became editor of The House of Commons, 1690-1715, for which she prepared over 450 entries. Her career was never without controversy. Disagreements with the director of the History of Parliament project led her to retire in 1990, leaving unfinished the five large volumes that would finally appear a dozen years later. She often expressed dissatisfaction with the result, and in return was criticized by some former colleagues for her part in it. In fact, the level of biographical detail in these volumes has always seemed obsessive to some, and the editors, bound to a Namierite format adopted in the 1960s, faced considerable difficulty in shaping so much precise material into general coherence. Whatever their faults, these volumes (now available online) remain for researchers the single most significant repository of information on politics during the reigns of William III, Mary II and Queen Anne. For that, Eveline deserves much of the credit.

Despite her association with Jacobite history, Eveline's published articles had a wide range, from the political management of Sir Robert Walpole to the Convocation of the Stannaries of Cornwall—the parliament of tin miners—and the households of the later Stuart monarchs. Her last essay for an academic journal (2006) was on the recusancy laws under Walpole. She did not see Jacobites everywhere, and was cautious, for example, in dealing with the claim that the third Earl of Burlington was a secret supporter of the exiled Stuarts. Her most important essay on Jacobite support in England may have been "The Waltham Black Act and Jacobitism," written with her close friend Professor Howard Erskine-Hill (1985), which argued persuasively that Walpole's Black Act had been motivated in part by fear of popular disaffection to the Hanoverian dynasty. Although brief, The Glorious Revolution (2000) may be her most successful book. While it adopts a decidedly pro-Stuart stance, the work rightly emphasizes the radicalism of James II and VII's toleration policy and the central importance of the defense of the Dutch Republic in William of Orange's calculations. The argument is stimulating as well as provocative and serves to balance more stridently Whig interpretations.

In the mid-1990s, however, Eveline turned to the possible Jacobitism of leading Whig members of the English aristocracy. She proposed that the third Earl of Sunderland, a Whig premier minister, was seriously plotting a Jacobite restoration in the early 1720s, as his political power waned in the aftermath of the South Sea Bubble. This evoked a strong response from other historians working in the field who objected to Eveline's conclusions and found flaws in her evidence. Yet, like Eveline, the critics may have simply underestimated Sunderland's treachery and deviousness in the service of his favourite cause: his own political survival. In a book entitled The Atterbury Plot, written with Howard-Erskine Hill and published in 2004, Eveline attempted to vindicate her hypothesis about Sunderland, as well as to reconstruct the immensely complicated Jacobite conspiracies of 1720-22. While not wholly convincing in restating previous arguments, the book does present a vast amount of information about the labyrinthine plots of the period that deserves careful sifting by future scholars. A definitive study of the Atterbury Plot remains to be written.

Eveline's main contribution to scholarship, beyond the History of Parliament and the books or articles she wrote down to 1994, was a series of edited volumes, containing contributions by other historians. They were based on conferences that she had helped to organize (in later years, under the auspices of the Jacobite Studies Trust) and testified to her unflagging support for the work of younger scholars, even those who did not entirely agree with her views. They began with Ideology and Conspiracy: Aspects of Jacobitism, 1689-1759 (1982), and continued with The Jacobite Challenge (with Jeremy Black, 1988), By Force or By Default? The Revolution of 1688-1689 (1989) and The Stuart Court in Exile and the Jacobites (with Edward Corp, 1995), before concluding with The Stuart Courts (2000). One happy result of these collaborations was the inclusion of Scottish and later Irish historians of Jacobitism, despite Eveline's own preoccupation with English history. Her collaborations with Edward Corp in exploring the exiled Stuart courts were particularly fruitful, due in no small part to Edward's exhaustive research and patient scholarship. Nobody who wrote seriously on the Jacobites, whether in the British Isles or the rest of Europe, wanted to miss Eveline's conferences, and all of them sought to contribute to one of her edited volumes.

Eveline was a very sociable person, as anyone invited to dinners at her London apartment in Goodwood Court, off Dorchester Street, can attest. Her vivacious laugh and distinctive forms of expression—she sounded slightly French while speaking perfect English, and very English when speaking perfect French—will linger in the minds of those who knew her. She became involved with the Royal Stuart Society, a group formed to promote the memory of the later Stuarts, and she worked strenuously to maintain a high academic level in the Society's regular lectures. Her primary role in the creation of the Jacobite Studies Trust was another manifestation of her desire to bring together scholars working on topics that had long fascinated her. She remained outgoing and gregarious, even after the death of her most stalwart supporter, her beloved husband Desmond Wyeth, in 2009. Eveline began to withdraw after the 2013 Jacobite Studies Trust Conference in Paris, which was followed in 2014 by the death of her old friend, Howard Erskine-Hill. Eveline's last years were spent at her home in Sevenoaks, where her health slowly but remorselessly declined.

Eveline Cruickshanks entered the historical profession in the 1950s, when female academics were often undervalued or ignored. She identified strongly with her near-contemporary, Professor Ragnhild Hatton, as a woman whose ideas had frequently been dismissed but who almost invariably knew far more and understood her subjects far better than her male critics. Eveline was careful, however, to point out that her friend Ragnhild was a Whig, while she maintained a Tory viewpoint, which she saw as one of radical opposition to prevailing historical trends. And as a Tory woman in a discipline dominated by Whiggish men, Eveline developed a determination and tenacity that served her well in setting the foundations of her career, although it made her less able to give way later when confronted by reasoned scholarly criticism. Not all of that criticism was patronizing, prejudiced or patriarchal. Like many pioneers in historical research, Eveline could get things wrong, but the interpretations that she put forward, even the ones that were seriously questioned, were always worth considering. They still are. Like many others associated with the Jacobite Studies Trust, I will miss Eveline greatly—especially her incredible, inimitable, unintimidated laughter.